Web History Through a Pinhole: About Destroy All Websites

Destroy All Web Sites! was a (pre-“blog”) blog providing commentary on and pointers to resources and emerging trends in technology. I authored and maintained this site from 1997 through 1999 which means, I suppose, that I was among the first wave of those who would later be called “bloggers”. Only one, final ‘edition’ of the site remains available, captured for all eternity thanks to the wonderful rabbit-hole that is the Internet Archive.

Destroy All Web Sites! ended up traversing broad topical expanses but usually kept technology as a common thread. It’s interesting to see which stories were transient and ultimately of little impact, and which were quite timeless and important. 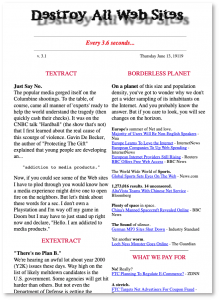 The name includes “Web Sites” (vs websites), which was the standard once upon a time. Grammarist refers to it as a “relic of the 1990s” (haha). At least the New York Times still holds tight to this ‘classic’ approach. Wikipedia honors both variants but also notes that the two word version is history.

I was elbows deep in HTML at the time and jumped into javascript with both feet as well (as evidenced by the janky date). I have neither the patience nor the constitution to do serious coding these days but still tweak my own sites, when needed. Hosting was god-awful expensive back then but I have a friend that had a super-boutique set of servers online (he is still coding).

The broken LinkShare artifacts at the bottom of the page are evidence of my affiliate marketing beginnings, back in the sketchy old days. I don’t recall what products I was linking to but, given my agitator editorial style at the time, it should have been Manufactured Consent by Noam Chomsky, The Whole Earth Catalog, or maybe a gas mask.

The site behind the site was borderless.net, which was a music publisher I was associated with. I let the domain expire at some point and it’s now in the hands of a Belgian recruiting company (could be worse).

I also let destroyallwebsites.com go for many years (15 years, actually). It was left all alone out in the wilderness for most of that time (can’t imagine why) but from 2012-2014 it did a tour with a PBN for a Japanese loan site. Then in 2018 we were reunited. Personally, I’m proud of my little trouble-maker, with its checkered past.

Many of the original, linked articles are still accessible via archive.org, if you are so motivated. Screen shots are also available in the gallery below.

Perusing the stories of the day is fascinating. Some are just charming, like “How I got hacked on AOL” and “Compuserve Partners With Elderly Care Site”. You kids wouldn’t understand!

The article “Europe Learns To Love the Internet” is ironic in light of GDPR. What happened to you two, Europe!? You made it 20 years though…that’s better than many couples.

Some are interesting little tidbits like “Torvalds: Preserve The ‘F-word in Linux” following the discovery of the word “fuck” in the Linux kernel. Oh my gosh, do engineers really swear!?

It’s hard to understand it now but Microsoft (not Google, Facebook, Apple or Amazon) was the evil empire back then. It’s a tough call but sometimes I think I’d happily take a trade, and have a shitty OS and a browser I can’t uninstall as opposed to complete loss of privacy and a global ADD pandemic.

More than a few stories reflect real issues that have barely changed at all. “Tech Women Applaud The Net, Each Other” painted a hopeful picture about the new opportunities the “Internet Economy” would offer women. I suspect most would say that things haven’t moved as far or as fast as predicted. Me too.

Here is another problem that turned out to be harder to solve than anyone expected. The anyone was Tim Berners-Lee, who called out the search engines of the day in “Web Creator Displeased With His Creation”.

Berners-Lee worried that when people use a “search engine, they ask a question (and) the search engine gives stupid answers because it reads a large proportion of the pages on the entire Web…unbelievable, and it doesn’t understand any of them.”

Google incorporated in September of 1998 and served just ~10K queries per day. Berners-Lee made the above statement at MIT in April of 1999 so it’s unlikely that Google was the primary target of his ire. But by September of the same year Google was answering 3.5M queries a day, and we know what happened next.

But what didn’t happen is a search engine that really understands content and context! Sure, Google, you can pilfer and scrape your way to “answer engine” status but, 20 years on, not much has really changed despite your massive link index, patent portfolio and a bouncing baby BERT. And that IS unbelievable. If Mr. Berners-Lee had a fresh take on this topic I would love to hear it. For sure, he is still trying to realize “the web as it was originally envisioned.”

If Mr. Berners-Lee had a fresh take on this topic I would love to hear it.

Destroy All Web Sites! was intended as a vehicle to share and comment on whatever seemed important or grabbed my attention that day/week/month; to draw attention to things that people might find valuable. Twenty years later, I hope the same for readers of this site, and my other projects. Thank you!

Send Me a Message or Find Me On Social

Send Me a Message